Multiple cases of a disease called canine brucellosis have been observed in dogs in Iowa, the state’s Department of Agriculture and Land Stewardship announced Friday. This illness has the potential to be transmitted from dogs to humans, health officials say, which makes these new diagnoses potentially concerning for people exposed to the affected animals.

Canine brucellosis is caused by Brucella canis, a type of bacteria that mainly infects dogs. Once dogs are sick, however, it’s possible that they can transmit the infection to humans.

Human infections with Brucella canis are rare, according to a statement from Iowa Department of Agriculture, but they have been known to happen—usually when a person comes into direct contact with reproductive fluids from an infected animal. People can also become infected by breathing in aerosol droplets of those infected fluids, or if the bacteria enters their body through their mouth, eyes, or a break in the skin.

In humans, a brucellosis infection can cause flu-like symptoms including night sweats, headaches, fever, joint pain, and back pain, according to a fact sheet from the University of Iowa’s Center for Food Security & Public Health. "Rarely, cases of brucellosis can involve the nervous system, eyes, or heart,"  the fact sheet also states. Antibiotics are used to treat the disease, but it can also come back after treatment.

In Iowa, the confirmed cases of canine brucellosis originated at a commercial breeding facility in Marion County, at which small dogs are bred. "We are in the process of notifying the individuals who have custody of the exposed dogs,” the state Department of Agriculture said in its statement. “Both the animals and the facilities are quarantined while the dogs undergo clinical testing.” People who recently purchased small dogs in Marion County are also urged to contact their veterinarians.

Brucellosis can be tricky to diagnose, according to the Mayo Clinic, particularly in the condition's early stages. It often resembles other illnesses, including the flu. "See your doctor if you develop a rapidly rising fever, muscle aches or unusual weakness and have any risk factors for the disease, or if you have a persistent fever," the health organization advises on its website.

While brucellosis usually affects dogs, other animals can also develop the disease, including cattle, sheep, goats, camels, pigs, reindeer, and wild boar. And if humans eat undercooked or raw meat from those infected animals—or if they consume unpasteurized milk, ice cream, butter, or cheese—they can also get sick, notes the Mayo Clinic.

But back to those scary dog-to-human headlines: Should you worry about getting this illness from your pup? Probably not. "The threat to most pet owners is considered very low," the Iowa Department of Agriculture said in its statement, although “dog breeders, veterinary staff and anyone who comes in contact with blood, tissues and fluids during the [canine] birthing process may be at higher risk.”

The statement does, however, provide a simple piece of advice that might decrease your chances of picking up an illness—any illness—from your dog. "This serves as a reminder that [it] is always important to practice good biosecurity,” the agency points out, “like thoroughly washing your hands after handling animals—even household pets." 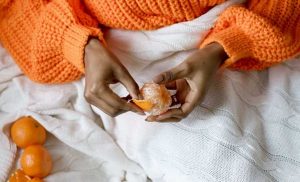 February 18, 2020
The Actual Reason Your Sexual Preferences May Change Over Time
Vegetables and fruit wash properly: As a self-lemons, asparagus, and Strawberries clean
Medications