Drinking spiked seltzer is a peaceful, enjoyable way to get your buzz on, one flavored fizz-filled sip at a time. In fact, the White Claws (yes, please!), Trulys, and Smirnoffs of the world are out-selling many craft beers.

Now there’s a new competitor on the horizon. Four Loko, notorious for their highly-concentrated alcohol, is giving hard seltzers a run for their money. In an Instagram post, the brand teased its newest drink, which is dubbed “The hardest seltzer in the universe.” The can has 14% ABV. Like, whoa. For some context, White Claw is 5% alcohol. If you do the math, drinking one Four Loko is equivalent to three White Claws. You guys, this is intense. 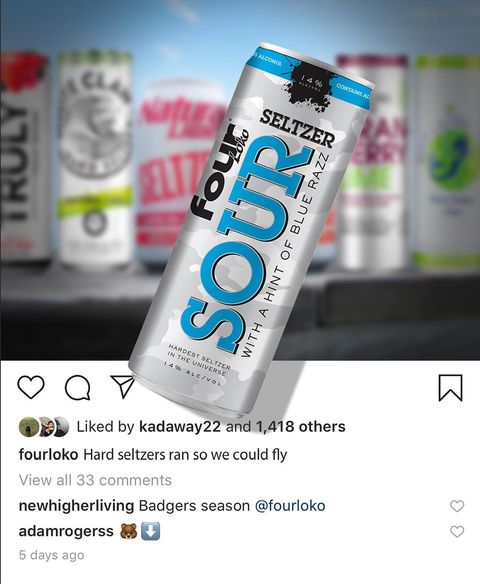 Party people across the country are pumped for the new release. However, some are having scary flashbacks to Four Loko’s old drinks that were dangerously concentrated and caffeinated. “Four Loko has come back to finish the job it tried to do in college…Kill us…This is 14% alcohol…Brace yourselves.” But don’t worry—the Four Loko on the market now doesn’t contain caffeine, so you’ll be good…as long as you drink responsibly!

While the sour blue raspberry flavor has us raising eyebrows, the best part of this announcement is hands down the shade. OH, THE SHADE. The caption literally @s every competitor in the market. It reads, “@whiteclaw @truly @naturallightbeer @smirnoffus @bonandvivspikedseltzer @pabstblueribbon @pressseltzer @henryshardsparkling @wildbasinboozywater.” Insta-game is strong. Four Loko goes on to comment, “Hard seltzers ran so we could fly.”

Four Loko is definitely not the first to hop on the seltzer bandwagon. In fact, just earlier this week Pabst Blue Ribbon announced the launch of its own hard seltzer with 8% alcohol and Natty Lite previewed a drink in the category with 6% ABV.

Things are getting wild in the seltzer aisle… How does a vegetarian diet on health?